A 3D printed Mastercard logo is seen in front of displayed stock graph in this illustration taken September 20, 2021.

Mastercard is looking to bring crypto to the masses by making it easier for banks to get involved.

The payments giant plans to announce a program Monday that will help financial institutions offer cryptocurrency trading, the company told CNBC. Mastercard will act as a “bridge” between Paxos, a crypto trading platform already used by PayPal to offer a similar service, and banks, according to the company. Mastercard and Paxos will handle regulatory compliance and security  — two core reasons banks cite for avoiding the asset class.

Some consumers have been skeptical, too. Cryptocurrencies like bitcoin are known for volatility, and the world’s top digital assets have lost more than half of their value this year. The industry has suffered billions in hacks since January, coupled with multiple high-profile bankruptcies.

Mastercard’s chief digital officer said polling still shows demand for the asset, but roughly 60% of respondents said they would rather test the waters through their existing banks.

“There’s a lot of consumers out there that are really interested in this, and intrigued by crypto, but would feel a lot more confident if those services were offered by their financial institutions,” Mastercard’s chief digital officer, Jorn Lambert, told CNBC in an interview. “It’s a little scary to some people still.”

Large investment banks like Goldman Sachs, Morgan Stanley and JPMorgan have dedicated crypto teams but have largely avoided offering it to consumers. Just last week, JPMorgan CEO Jamie Dimon called cryptocurrencies “decentralized Ponzis” at an Institute for International Finance event. If banks do embrace this Mastercard partnership model, it may mean more competition for Coinbase and other exchanges operating in the U.S.

The payments company said its role is to keep banks on the right side of regulation by following crypto compliance rules, verifying transactions and providing anti-money-laundering and identity monitoring services. Mastercard will pilot the product in the first quarter of next year, then “crank the handle” to expand in more geographies. Lambert declined to say which banks have signed up so far.

While the industry is living through a bear market or “crypto winter,” Lambert said more activity down the road could lead to more transactions and fuel Mastercard’s core business.

“It would be shortsighted to think that a little bit of a crypto winter heralds the end of it — we don’t see that,” he said. “As regulation comes in, there is going to be a higher degree of security available to the crypto platforms and we’ll see a lot of the current issues getting resolved in the quarters in the years to come.”

Mastercard and Visa have both been on partnership sprees in crypto. Mastercard has already teamed up with Coinbase on NFTs and Bakkt to let banks and merchants in its network offer crypto-related services. Last week, Visa partnered with FTX to offer crypto debit cards in 40 countries and has more than 70 crypto partnerships. American Express has said it’s exploring using its cards and network with stablecoins, which are pegged to the price of a dollar or another fiat currency.

Cryptocurrencies, ironically, were meant to disrupt banks and middlemen like Mastercard and Visa. Their underlying technology, blockchain, allows transactions to move without intermediaries. Still, Lambert said they haven’t seen industry pushback on their involvement. Crypto is on the “cusp of really going mainstream,” and still needs to team up with the incumbent players to get there, he said.

“It’s hard to believe that the crypto industry will truly go mainstream without embracing the financial industry as we know it,” Lambert said.

Binance holds $74.7 billion worth of crypto in its reserves and roughly 40% are in the firm's own tokens, report says

Sun Nov 13 , 2022
Antonio Masiello/Getty Images Nearly half of Binance’s reserves are in the firms own stablecoin and native token, according to Bloomberg. Co-founder Changpeng Zhao said earlier this week Binance would be more transparent and provide proof of reserves. The exchange’s total holdings amount to about $75 billion. About 40% of Binance’s […] 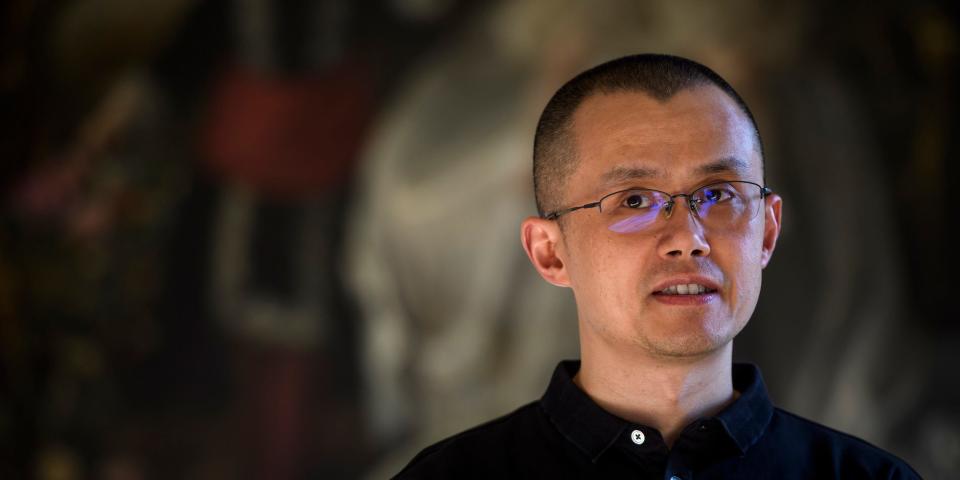