Sergino Dest of USA and Milad Mohammadi of Iran battle for the ball during the FIFA World Cup Qatar 2022 Group B match between IR Iran and USA at Al Thumama Stadium on November 29, 2022 in Doha, Qatar.

Through October of 2022, crypto-related brands shelled out $223 million on ads in the U.S., up 150% from $89 million for all of last year, according to MediaRadar. Few were as aggressive as Crypto.com, which said in late 2021 it was committing $100 million to an ad campaign that would feature Matt Damon and run across 20 countries. The company is an official sponsor of the 2022 World Cup taking place in Qatar.

What the crypto industry giveth, it can taketh away.

The stunning collapse this month of cryptocurrency exchange FTX and founder Sam Bankman-Fried’s broader empire spells further trouble for ad-supported media businesses that had come to see crypto as a new growth engine with money to burn. And FTX is far from the only problem, as the contagion has been spreading for months.

Coinbase has lost over 80% of its value and the company cut 18% of its staff in June, when CEO Brian Armstrong admitted the business grew too quickly and stressed “the need to manage expenses.” Crypto.com has reportedly cut 40% of its workforce, eToro downsized by 6% and in July canceled a planned merger with a special purpose acquisition company, and BlockFi just declared bankruptcy.

In the third quarter of this year, the top crypto advertisers spent just $35 million on ads, according to MediaRadar, an 80% drop from the first quarter, which got a huge boost from the country’s single biggest sporting event — the Super Bowl.

The pullback in spending, which is expected to intensify given the industry’s deepening turmoil, is notable as ad-based companies face broader challenges from soaring inflation and fears of a recession. But while crypto represented a promising area for growth, it still makes up a tiny portion of the overall ad market.

Companies overall are expected to spend almost $89 billion on TV ads this year, across linear programming and connected devices, and close to $250 billion on digital ads, according to Insider Intelligence.

Facebook (including Instagram), Snap, Twitter and TikTok combined are expected to pull in $57.1 million in ads from crypto exchanges this year, according to SensorTower. That’s about even with 2021 figures, though almost all of the spending last year was on Facebook and Instagram.

In Alphabet‘s third-quarter earnings call last month, the company blamed a slowdown in revenue growth in part on reduced ad spending by cypto companies and other financial firms. Google’s sales growth was the slowest for any period since 2013, other than one quarter during the Covid pandemic.

SensorTower data shows a big spike in crypto ad spending on digital media around October and November of last year, as prices were peaking, and a steep drop after the first quarter of this year. In April, the crypto sell-off began in earnest, with bitcoin and ether each losing well over half their value over the next three months.

The Super Bowl created a spending splurge that the industry may never see again. A 30-second spot during the NFL’s grand finale in February cost an average of $6.5 million, and crypto was a huge theme.

Coinbase, Crypto.com, eToro and FTX spent a combined $54 million on Super Bowl ads, according to MediaRadar. Coinbase aired a 60-second commercial showing a bouncing QR code that, once scanned, led to a promotion offering $15 worth of free bitcoin to new users. FTX signed up Larry David for an ad, urging viewers not to miss out on crypto and declaring NFTs “the next big thing.” A version of “Fly Me to the Moon” played during eToro’s commercial.

In 2021, Crypto.com paid $700 million to put its name on the home of the Los Angeles Lakers for the next 20 years. FTX signed a 19-year deal worth $135 million with the NBA’s Miami Heat for naming rights to the team’s arena, partnered with the NBA’s Golden State Warriors and had its logo placed on uniforms worn by Major League Baseball umpires.

Miami-Dade County is now trying to get the FTX named scrubbed from the arena. Miami has become a major hub for the crypto industry, and in September FTX moved its U.S. headquarters there from Chicago. The company spread its wings in the city, sponsoring a three-day crypto weekend in May on South Beach called “FTX Off the Grid.”

Jordan Levy, a Miami-based venture capitalist, said that while other crypto companies have advertised in the city, FTX was on another level.

“None of them have as significant of a presence in Miami as Bankman-Fried and FTX,” said the managing partner of SBNY, formerly SoftBank New York. “They’ve tried to do some guerrilla marketing stuff that put them on the top of the food chain from perception perspective.”

The money FTX was spending now presumably goes to zero. According to SensorTower, the company’s online ad spending quadrupled this year to $13.3 million, with roughly half of that coming in the first quarter.

Coinbase, the only major exchange that’s publicly traded in the U.S., said in its earnings report this month that its sales and marketing expense dropped 46% in the third quarter from the prior period to $76 million. The company attributed the decline to “our decision to reduce performance marketing, due to lower efficiency in this spend associated with softer crypto market conditions as well as savings associated with our headcount reduction.”

A Crypto.com spokesperson said via email that the company’s $100 million campaign ran from October 2021 through February 2022. Since then, “we ran additional advertising as part of our marketing strategy, and we continue to focus on our global brand and sports partnerships,” the spokesperson said. That includes sponsorship of the World Cup.

Brad Michelson, eToro’s U.S. head of marketing, said the Israel-based investment platform will “actively adjust spend based on performance,” and plans to continue building its brand in the U.S.

“It’s no secret that the markets are in a pull-back phase, and our budgets are being reallocated accordingly,” Michelson told CNBC in a statement.

The crypto market has suffered downturns in the past, only to bounce back and attract even greater sums of cash and new entrants.

Joseph Panzarella, director of digital media and marketing at the Yeshiva University’s Katz School of Science and Health, said that even if the market starts recovering, the high-profile scandals of 2022 will force companies to take a more serious approach when promoting their offerings.

“What they came out with was like, ‘Hey, we’re going to stick it to the Fed,'” Panzarella said, referring to the industry’s focus on decentralization and its ability to function without the heavy hand of government. “I guess they have to eat a little crow and say something like, ‘Hey, we are now we’re now [open to] being regulated.'”

Sat Dec 3 , 2022
The bankruptcy filing submitted in New Jersey lists Ankura Trust Company as its largest creditor, to the tune of $729 million, followed by FTX US at $275 million. The SEC is fourth on the list, owed $30 million as a result of penalties laid down earlier this year. BlockFi Chapter […] 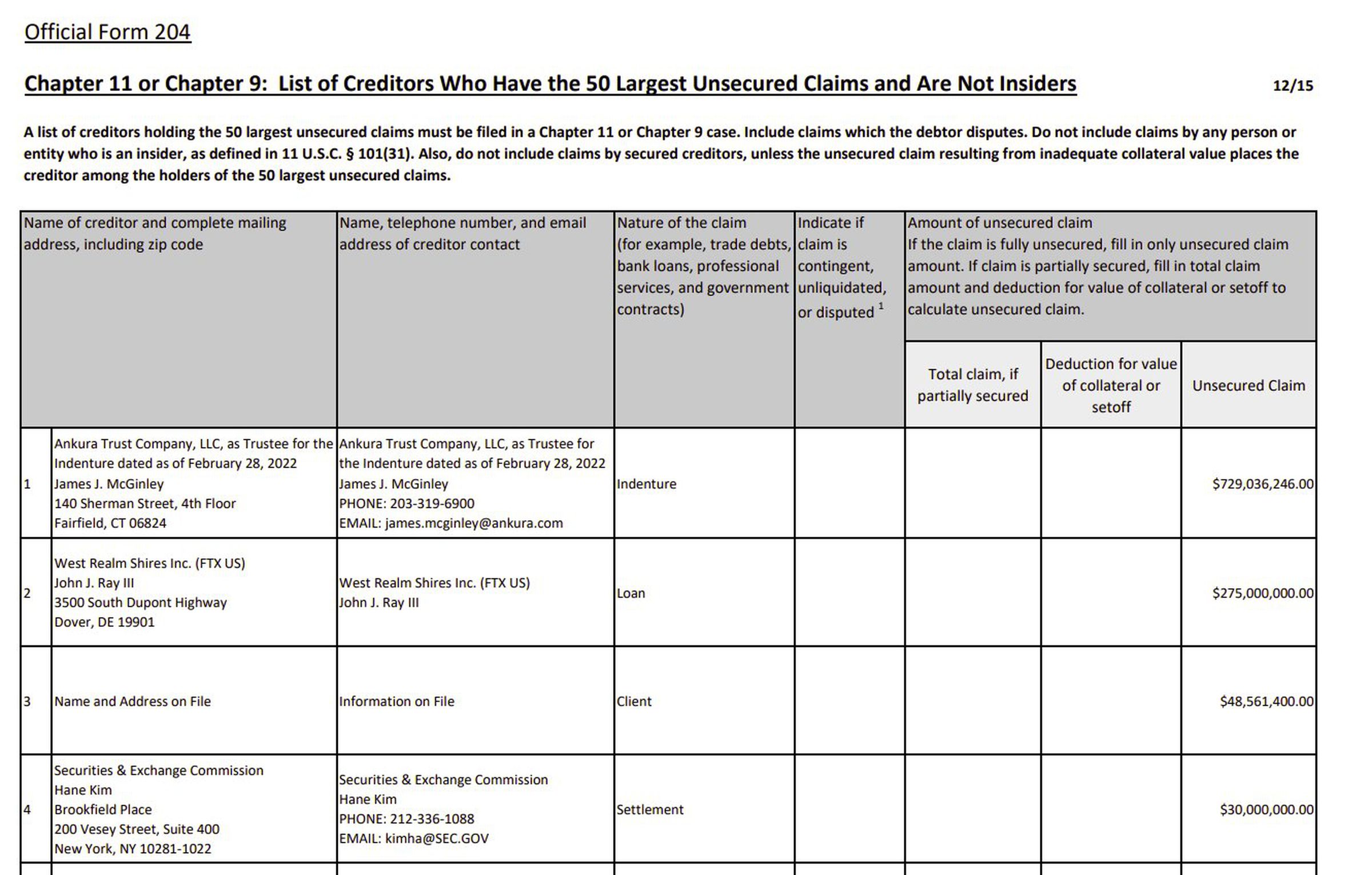